How to Train for a Marathon PR on a Tiny Island

This runner managed to train on Mauritius, a tiny island off the east coast of Africa.

Jessica Lukasik understands teamwork. As a Junior Lieutenant in the U.S. Coast Guard, a former member of the U.S. Coast Guard Academy Triathlon Team, and now an athlete on the U.S. Military Endurance Sports (USMES) elite team, the 25-year-old thrives on the camaraderie and commitment to team and country that it takes—whether on duty or on the race course—to get her job done. She exhibits that determination daily through her service in the Coast Guard. “She proved it decisively at the Rock ‘n’ Roll Seattle Marathon in June 2017, where she ran 3:08:56, knocking more than 30 minutes off her marathon PR to top the podium in the 25-29 age group. And she showed her mettle at the IRONMAN World Championship in Kona, Hawaii last October, winning the 2017 military division title in a time of 11:21:01.”

But for two and a half years—just as she got really good at the IRONMAN distance (the longest distance in triathlon)—Lukasik faced a different type of challenge: going it alone. That’s because she was on orders on Mauritius, a tiny island off the east coast of Africa, “smack dab in the middle of the Indian Ocean,” as she puts it. 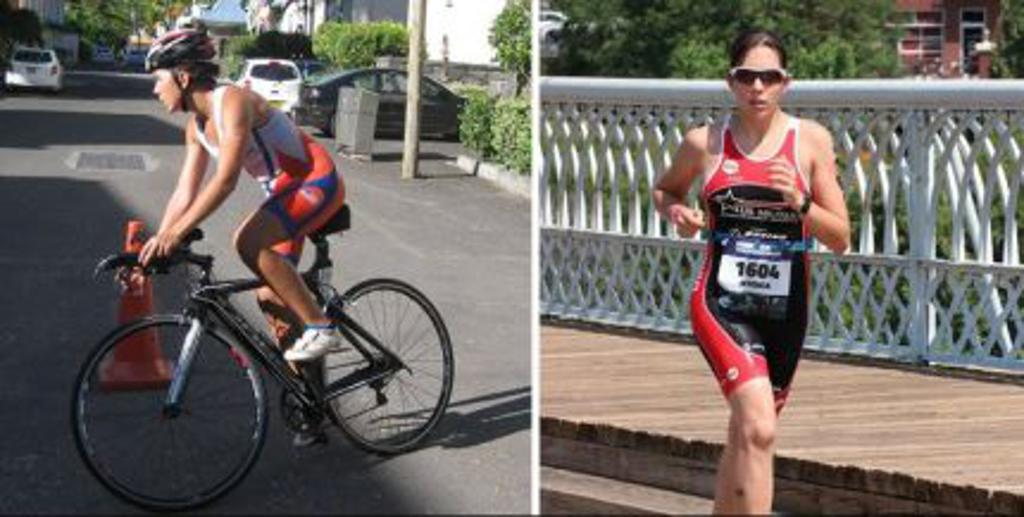 Interested in trying your first triathlon? Learn more at mytimetotri.com.

Lukasik went to Mauritius on a Fulbright scholarship, to work on an economic and environmental sustainability plan for the country while pursuing her Master’s degree in economics. She was fresh out of the Coast Guard Academy, where she had happily joined her first triathlon team. A swimmer since childhood, she raced her first sprint distance triathlon at the age of 17, tagging along after her mom registered. She loved the experience, and in her sophomore year at the Academy, when she discovered the Coast Guard Triathlon Team, she was all in.

“In my first year on the team I got to go to collegiate nationals, which was really fun,” Lukasik explains. “At the end of that season, the team captain said that we had the opportunity to send some of our members to an IRONMAN. He asked who wanted to do it, and he thought I was crazy when I said I wanted to go. I had only done an Olympic distance up to that point,” she adds.

“I do IRONMAN for the adventure, so if there’s no challenge, that’s kind of defeating the whole purpose.”

But, determination prevailed. Lukasik immediately registered for her first marathon to make sure she was ready; she raced the Marine Corps Marathon in October 2011, and then IRONMAN Florida in 2012. “It was one of those things where you start out terrified, thinking, ‘What have I gotten myself into?’ It was four times longer than any race I’d ever done. But you just have to roll with the adventure and find a way though,” she says. “I crossed the finish line and immediately thought, ‘That was so hard. I’m never doing that again!’ And then two days later I was looking for my next race.”

Along with the new title of IRONMAN finisher, Lukasik earned credibility among her teammates: The following year she was chosen as a team captain, helping manage and mentor her fellow athletes, a role she cherished. When she graduated she began doing triathlon alone, which she said “really did change the game quite a bit.” She then moved to Mauritius, which she says changed things up even more.

Sure, triathlon and marathon running are individual sports. But what helps most endurance junkies thrive? According to Lukasik, it’s swims, rides, and runs with training buddies. Take that away, and the motivation to train and compete can take a frustrating hit.

Lukasik certainly wasn’t the only triathlete on the island, but they were few and far between—tough for this natural-born team player. Mauritius does have a triathlon federation and even some grassroots triathlon clubs, but getting involved with either (which she eventually did) required a great deal of networking. Even then, access to competitions was extremely limited. She raced local Olympic distance events with the federation (although, as an American, she was ineligible for any rankings), and sprint races put on by the local tri club. “It wasn’t particularly high-level competition,” Lukasik says. “And for IRONMAN, I had to look outwards.”

The closest venue was IRONMAN South Africa, which Lukasik raced in April 2015. “Training for that was interesting!” she says. Mauritius is about the size of Rhode Island, with far fewer roads and far fewer good roads. The swim was the one thing that Lukasik could train for quite easily, as the entire island is surrounded by a shallow, sheltered lagoon. Cycling and running, however, is unsupported. Lukasik says there are local bike shops, but very few, and with limited supplies. “I remember trying to buy spare tubes, and they had run out. It’s the most basic thing a bike shop could stock, and they just had to wait for more,” she recalls.

Although Amazon has yet to reach Mauritius, an eclectic mix of gear is available, brought to the island from all around the globe. “You have things coming in from all different places,” Lukasik says, referring to the island’s multicultural resident mix and the visitors it draws. “You can find stuff, but […] you have to know who to talk to and you have to network for stuff. Your sporting career really becomes an extension of your social life and social network; the more embedded you are, the better you’re going to fare. This is very different than in the US, where you can, if you need to, go at it alone.”

Lukasik adds that despite these challenges, she couldn’t ask for a more beautiful place to train. “As limited as some of the resources are, the environment is unbelievable,” she says. Her favorite bike route in Mauritius features a winding, 16-percent grade mountain climb. “There are definitely portions of the road that are incredibly hazardous to bike on, even when drivers are respectful, which is hit or miss,” she says. And while the weather is ideal during the Mauritian winter, with temperatures in the 60s and 70s, summertime sees high heat and humidity. “You typically have a few periods where you’re limited by cyclones, which can range from insane and destructive to just really, really, really rainy,” she says.

While working on her master’s degree through the University of Mauritius, Lukasik spent three months at a training facility in a remote lodge in Arusha, Tanzania. This was the summer of 2015—after she raced IRONMAN South Africa and qualified for the pinnacle race in Hawaii. “There were no Americans out there whatsoever, so I was a cultural oddity at that point, and in terms of athletic facilities and support, there was really nothing. The lodge had one broken treadmill, and they did not recommend that we ran off of the lodge facility by ourselves. I managed to bring my bicycle with me, but after a few rides by myself I realized I was probably risking my life,” says Lukasik. However, through Facebook she managed to track down a British expat cyclist living about 50 miles away, who graciously drove the slow, treacherous roads to lend Lukasik a trainer.

Stationed in Seattle since mid-2016, Lukasik’s second crack at the IRONMAN World Championship came in 2017. This time the training was understandably different. Her experience of the race also changed dramatically. “In 2015 I got very worked up over the competition and the caliber of people that were there. Probably in large part because of the contrast to Mauritius—coming from that isolation to race against the best in the world.” That year was also tough on her in terms of the heat.

Going into the 2017 race, Lukasik embraced a different mindset. “It wasn’t about me and the competition, it was about me and the island. What can I do to not let myself get defeated by the heat and the wind?” She says that attitude made the race more enjoyable, not having to worry about everyone that passed her, but enjoying the rugged majesty of the area instead.

This “by feel” approach paid off in the 2017 Kona race, where Lukasik scored the win in the military division. Now 25 years old, her near future goals include a steady rise in both sports, including making the podium at both an IRONMAN and a marathon event, and even turning pro one day. She says this year she’d also like to start branching out into new climates and terrain. “I haven’t tried a race at altitude yet, or somewhere that’s really cold, so I’d like to start testing myself in different environments. I do IRONMAN for the adventure, so if there’s no challenge, that’s kind of defeating the whole purpose.”

Meanwhile, the USMES team provides Lukasik what she missed most after leaving the Coast Guard Academy. She says that it’s more than just a network of teammates—that USMES gives her a purpose for her sports again. “Even when I was off on my own in Mauritius, I would still race in my Coast Guard jersey from the Academy,” says. “Nobody knew what it meant or stood for, what it signified to me or to my country, or anything. But to me, it was important.”

This article was originally posted on IRONMAN.com.