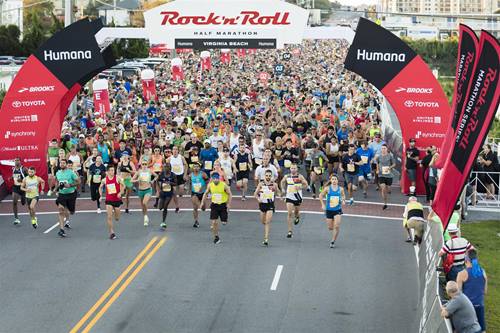 A common introduction to distance running goes something like this. College graduate wants to keep in shape. Does 5K. Jumps to 10K. Has a little too much to drink one evening and buoyed by liquid courage registers for a half marathon. Figures, hey, I’ve gone this far, might as well take the 26.2 plunge.

Ginsburg loathed running before diving in back in 2003.

“The whole concept of running just for running’s sake never enticed me,” said the economist.

But in the summer of 2002, a friend’s mother died. The friend decided to run the Marine Corps Marathon in his mother’s honor. Ginsburg swallowed the bait and joined his friend.

“It was ugly, very painful,” said Ginsburg, who finished a bit shy of six hours. “Later, I found out I had bronchitis.”

“A sinus infection,” he said.

Not one to go down without taking three cuts, Ginsburg took the 26.2-mile challenge again in 2005, this time at Rock ‘n’ Roll Nashville. This one, he knocked waaaaaaay out of the park finishing near 4 hours, 30 minutes.

Ginsburg enjoyed the experience so much he decided he was going to join the 50 States Club and now has run a marathon in all 50 states.

Music and bling are the reasons he’s fallen hard for the Rock ‘n’ Roll Marathon Series.

“I like the music on the course and the medals,” he said.

He’s done his share of Remix Challenges at Rock ‘n’ Roll events, collecting a mountain of medals. He used to keep them on a credenza near his office desk A person spotted the haul one time and asked, “Does that mean you won all those races?”

“It’s a nice course and a beautiful city,” he said.

The best part about his Rock ‘n’ Roll experience are the people he’s met along the way, the former strangers turned friends who have joined him on running adventures. He did the Capital City Challenge, running Washington D.C. on a Saturday, then Mexico City on Sunday,

He knocked off the Tex Mex Challenge, finishing Dallas on a Sunday morning, hopping aboard a jet and running Mexico City on a Sunday evening.

So how much longer will he continue putting one foot in front of the other on Rock ‘n’ Roll courses across the globe?

Said Ginsburg, “Because of the friends I’ve met over the years, I’m going to keep doing it until I can’t.”