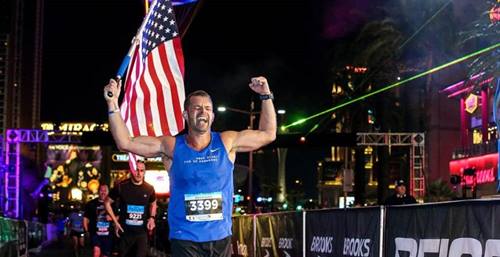 Carrying the Stars and Stripes

Curtis Brake carried the flag to support Wear Blue at the race.

Running marathons beats up the legs. For Curtis Brake, he gave his legs and arms quite the workout while running the Rock ‘n’ Roll Las Vegas Marathon.  Brake, who lives in Dupont, Wash., ran the entire 26.2 miles carrying a 3-foot by 5-foot American flag.

Brake carried the flag to support wear blue: run to remember, a running organization that honors the memory of fallen military members.

After crossing the finish line, Brake was asked which hurt more, his arms or legs.

“Neither,” he said. “The flag is heavy, but it’s not as heavy as the burden and pain our military endures. Trust me, it’s a struggle (carrying the flag) but not even close to the struggle the military goes through. They don’t quit, so I can’t quit.”

Brake also ran the race in honor of Jarod Newlove, a Navy petty officer 3rd class who was killed in Afghanistan in 2010. Brake planned to give his marathon medal to Newlove’s two children, a son, Jordan, and daughter, Addison.

Said Brake, “Jarod’s children, they’ll be getting my medals.”