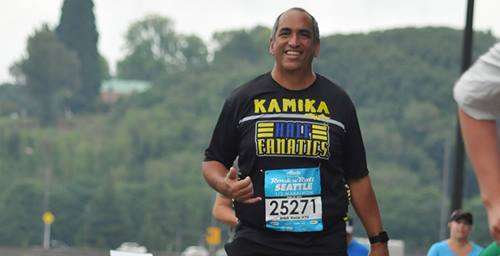 This Kauai native has quite the running resume.

Even among long-distance runners, who are known to dance to the beat of a different drummer, Kamika Smith is distinct.

He lives on the breathtakingly beautiful island of Kauai yet confesses that he loves the cold.

“Maybe I can enjoy it because I know I’m coming back to the warmth of Hawaii,” said the 55-year-old Smith.

Hence, he has trekked to Antarctica twice for half marathons.

Asked his marital status, Smith said he’s single, jokingly adding, “That’s why I get to do all this.”

Smith ran his first half marathon his senior year at Seattle University on Mercer Island. It was his first road race of any kind, skipping the typical 5K to 10K to half build up. Plus, it was a hilly layout.

“I didn’t know any better,” he said. “I was out there doing the run and having fun.”

Doing the run and having fun would serve as a nice slogan for Smith’s current running status. His first Rock ‘n’ Roll event came at San Diego in 2001.

“Just hearing there were rock ‘n’ roll bands every few miles, I figured that would keep me motivated,” he said. As for why he got hooked on the Rock ‘n’ Roll brand, Smith added, “The bands. The bling is really cool. And all the different locations. Since I was on my 50-state trek, it made sense to do all the states they were in.”

While the bands, the medals and race buzz all serve as attractions, the real magnet that draws Smith to Rock ‘n’ Roll races like moths to light are the people.

“It’s the friendships you make,” said Smith, whose family is in its third generation of operating river tours and luaus in Hawaii. “You have like-minded people doing Rock ‘n’ Roll races, enjoying the camaraderie.”

“Most of my family’s pretty big,” he said. “I wanted to break that cycle. Get out and exercise and not be heavy. I wanted to do something so I wouldn’t get ‘Hawaiian’ (as in heavy). Poi is a good thing but it packs on the pounds.