This prolific runner shares his story.

The pain in Jeff Calene’s right ankle was excruciating.

“It felt like a knife cutting through my ankle,” Calene recalls.

The podiatrist he visited was not optimistic, telling Calene his ankle bones would have to be fused and that his days of running 5Ks and 10Ks were history.

Calene didn’t pout when the podiatrist delivered his dour prognosis. Instead, he headed to a shoe store. A salesman recommended that he change from a light-weight shoe to one with more stability.

Raised in Moscow, Idaho, Calene admits he was not athletic growing up. By fourth grade he was learning to program computers. He bought his first computer with money earned from a newspaper route.

While his father didn’t run road races, he did jog most mornings.

“That always stuck with me,” he says.

Despite being woefully undertrained he ran his first half marathon in 2002. He didn’t know it was a trail race, the first eight miles uphill, the last five slamming his quads on the descent.

“I could barely walk after the race,” he says. “Uphill, I thought I was going to die. Downhill, that was even worse. I just felt beat up.”

He phoned a friend, who promised to deliver new socks by the half marathon. The buddy arrived with the socks.

“Just go one more mile,” the friend said. “I’ll meet you there. If you still want to quit, fine.”

His fastest Rock ‘n’ Roll half marathon came in Philadelphia, a 2:25:56 finish. The next month he raced Rock ‘n’ Roll San Jose, determined to PR on his 36th birthday. His finish time: 2 hours, 25 minutes, 57 seconds.

He laughs at the absurdity of missing his personal best by one second.

“I think it’s just one of the most beautiful courses, running along the rivers,” he says. “In September, the leaves are changing.”

“It was beautiful countryside,” he says. “I kind of climbed out of my shell and wore a kilt.”

He likes San Diego, too, the birthplace of the Rock ‘n’ Roll Marathon Series.

“The different communities, people come out on their porches and cheer you on,” he says. “It’s one of the more unique races in the entire series.” 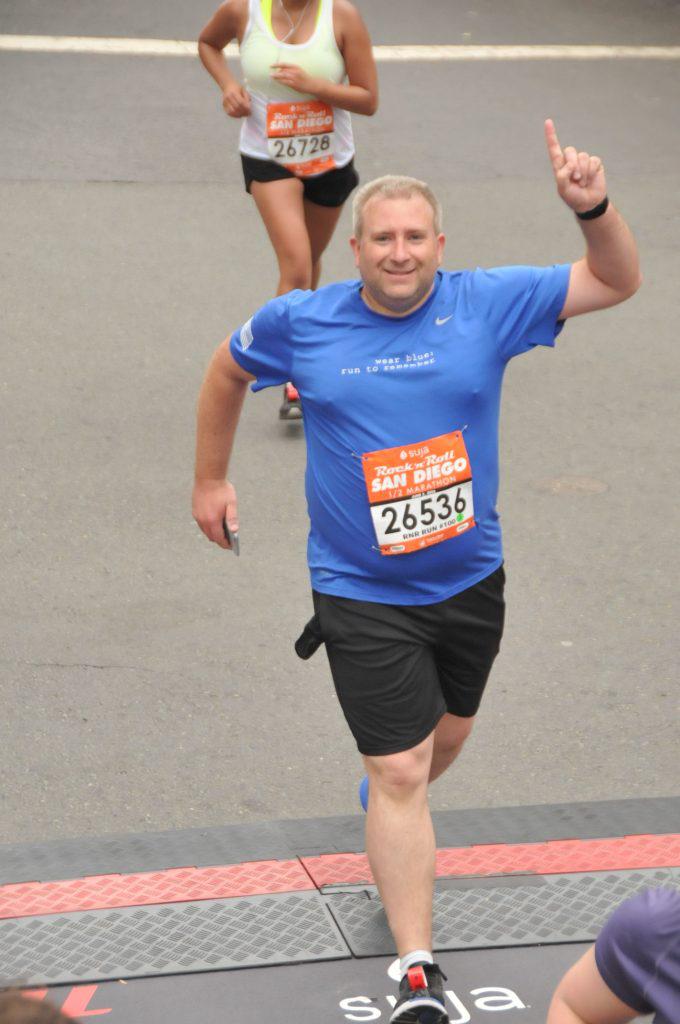 But more than the sites, what he loves most are the friendships he’s developed along the way. Like Kamika Smith from Hawaii, who waits at the start line, lets seemingly everyone pass him as the gun goes off, then catches up with runners, trading conversations along the way.

“More than anything,” adds Calene, still up well past 1 a.m. after flying into D.C. earlier in the week, “it’s about the friendships I’ve made.”