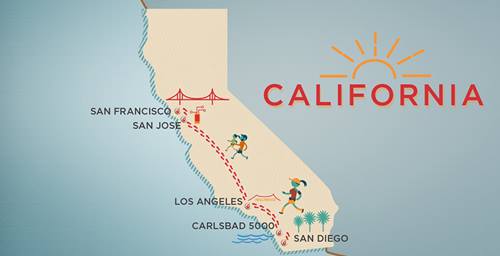 Our Favorite Running Destinations in California

Looking for a fast or fun course, beach or bay views, California has it all!

We understand all runners are unique; some chase the challenge of conquering uphill climbs, while others seek to soak up scenic ocean views. One thing all runners can count on at a Rock ‘n’ Roll event is having a memorable, rockin’ time!

Whether you’re a runner looking for a fast or fun course, beach or bay views, California has it all! California is not only the birthplace of the Rock ‘n’ Roll Marathon Series, but also the locale of five unique Rock ‘n’ Roll races — San Francisco, Carlsbad, San Diego, San Jose, and Los Angeles.

California is truly a runner’s paradise. Check out what Rock ‘n’ Roll races are up your alley, lace-up, and hit the ground running in this beautiful state.

Looking to cross running the Golden Gate Bridge off your bucket list? Then San Francisco is the race destination for you! As one of the two races to cross the bridge, this challenging course tours 13.1 miles through the streets and hills of the City’s most beautiful neighborhoods. Starting in Golden Gate Park and finishing at Civic Center Plaza, runners enjoy breathtaking views of San Francisco, live music and cultural entertainment along the course, with an epic Finish Line Festival, headline concert and complimentary beer. Rock ‘n’ Roll San Francisco is worth the climb!

The Carlsbad 5000 is a Rock ‘n’ Roll Marathon Series Signature event known as the World’s Fastest 5K for the countless world records set on the flat and fast course. Not only record setting, the course is also known for its scenery, covering both the coast and downtown Carlsbad in all their glory. Once you cross the Finish Line, you’ll Party by the Sea with custom Pizza Port brews and live entertainment!

In 1998, Rock ‘n’ Roll running history was made at the inaugural Rock ‘n’ Roll San Diego Marathon. Run America’s Finest City with a Start Line in historic Balboa Park, then cruise through San Diego’s favorite neighborhoods including North Park, Mission Bay, and University Heights. This race features an epic Finish Line Festival in Downtown San Diego’s Waterfront Park where you can celebrate your achievements while rocking out to the headliner concert and rel="noopener noreferrer" sipping a complimentary beer. San Diego also features the Remix Challenge where you run the Saturday 5K in Balboa Park and the Marathon, Half Marathon, or Half Marathon Relay on Sunday to earn 3x the bling!

Ready to set a personal record? Rock ‘n’ Roll San Jose is renowned as California’s fastest half marathon course, boasting a fast, scenic course that draws runners of every fitness level each year. The half marathon and 10K courses journey through one of three remaining Japan Towns left in the United States, while 5K participants race their way through historic downtown district. Since its inaugural year, retired San Francisco 49ers Super Bowl legend, Roger Craig, runs the course with participants. Keep your eye out for him!

If Halloween is your favorite time of year, then the Los Angles event will be hauntingly fun! Known as the world’s largest Halloween Half Marathon, runners hit the streets of LA in their spookiest running costumes. The course runs through the Entertainment Capital of the World, and a costume contest awaits runners at the spirited Finish Line Festival and headliner concert. With perfect fall running weather, it’s a great time to visit Los Angeles and tour the streets by foot. You may even spot a celebrity or two!

The Golden State is special since it is the birthplace of the Rock ‘n’ Roll Marathon Series, beginning with the 1998 Inaugural San Diego Marathon. Since then, the series has evolved, with more cities, courses, and celebrations across the world!

Join us, and get ready to rock a race, or two, or five in California!