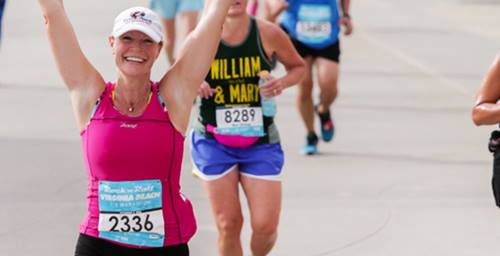 Push Past "the Wall" at your Next Long Race

These 4 tips will help you get over the toughest humps.

I was working on the crew for a few runners at an ultramarathon last weekend, a 50K through a technical, rocky, wooded area. It was going to bring out the animal in them. Spirits were high as the runners set out with their goals, which varied from setting the course record to finishing before the cut-off time.

Twenty-two miles in, a runner who had led the pack at the beginning limped to an aid station. He had struggled with a walk over the past few miles. His IT band was the culprit. He announced his decision to DNF (Did Not Finish).

Another runner ran into the aid station, and hearing the conversation, grabbed the fellow runner by his shoulders. Telling the race officials not to accept the DNF, he offered the best advice I’ve heard to the disheartened runner: “It’s never always going to get worse.” He reminded the runner to stop and stretch as needed but to keep moving forward, even at a walk. We cheered as the runner crossed the finish with a big smile on his face.

While you cannot always rely on encouragement from a fellow runner, there are several things you can do when you hit the wall during a race. Here are a few tips to help you push past the limits:

When your body says "stop"

Listen to what your body needs. You may need to work out a cramp. If your hydration is poor, take in some fluids. Maybe you need to reenergize with fuel or an electrolyte supplement. Give these things a chance to work. If you feel better, pick your feet up and move on.

You’ve hit that wall in your head. Sit down and regroup your thoughts. Maybe you’ve blown your PR, or you won’t reach the time you set for your goal. Think about all of the training you’ve done for this race. You don’t want to leave that on the table. Listen to the runners who pass and encourage you.

Whether it’s physical or mental, break your race down into manageable chunks. Whether you limp, walk or crawl, focus on smaller goals. Think of getting to the next aid station or the next mile point on your GPS. It can be too overwhelming to think of the total mileage left in a race.

There may be a time when a DNF is unavoidable. You understand your body best. If you have reached the point where you know that your body is shutting down, you have to accept it. It’s not worth the health risk. A DNF is always better than a DNS. Be proud of your efforts to go for it.

Remember, there’s always another race. We’re not in this for just one.