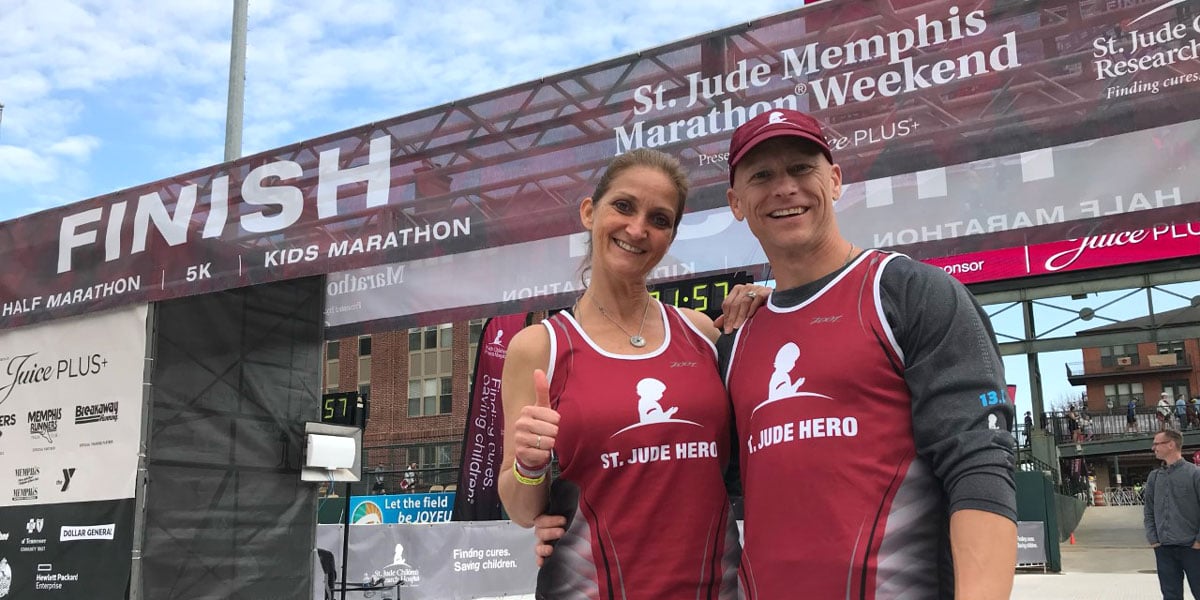 Reason #3: To Make The World a Better Place

How Nashville runner Susy Meade changed her relationship with running by putting a reason behind her miles.

As part of our 25 Years Running celebration, here's the story of one runner who gives us Reason #3 to run: Because you can fun for a cause that's bigger than yourself, changing someone's life in the process.

St. Jude Children’s Research Hospital extraordinaire Susy Meade was 39 years old when she started running. “My mother loved to run,” recalls the now 52-year-old Office Administrator who lives in Nashville, Tenn. “I remember being 11 years old and her asking me to come with her. About a block in I’d say, ‘forget it, I’m going home!’”

There’s no stopping Meade now, as she and her husband Ed target numerous races, including Rock ‘n’ Roll Running Series Nashville this year. Over the course of many races (50 half marathons and four full marathons for her), Meade and her husband have raised over $50,000 for St. Jude through their racing efforts.

So how did Meade find this purpose, which she then shared with her husband? Back in 2014, Meade met a St. Jude ambassador at Rock ‘n’ Roll Running Series Las Vegas. Meade realized she wanted to run for something bigger, but was scared to “commit, ask for money, and the rejection.” She came home from Vegas and turned on a movie—only to realize the child in the movie was a patient at St. Jude Hospital. “I started crying. That was it,” she recalls.

It wasn’t an easy road, however. In February 2015, Meade broke her hip due to stress fracture complications and had emergency surgery. She did the Nashville half marathon with a cane that April.

“Obviously it was my worst half ever, but it was an awesome experience,” she says. “Being at the back of the bus, so to speak, gave me the ability to look around at all kinds of people. The hand cyclists, and the visually impaired runners with their guides. It taught me to look around at the people I was running with. Whoever calls it a solo sport isn’t a runner. The camaraderie, the belief in the person next to you. The only person you’re competing against is the one in your head.”

Before the race, Meade’s doctor had told her to listen to my body. Meade’s husband piped up: “You don’t understand—she wants to do 13.1 miles this weekend.” The doctor said to her: “I hope you have a backup plan.” Meade responded: “There is no backup plan. I am running for kids with cancer. They don’t get to have a backup plan. Their whole life changes at the drop of a hat. There’s just no excuse. It’s running for something bigger than you could imagine or feel.”

“Both my husband’s and my mom died of cancer. When you start fundraising, they ask you your ‘Why.’ What our moms went through, they would never want a child to go through,” Meade explains. She goes on to say that some of her most powerful moments have been witnessing families who’ve lost their child yet continue to be part of the St. Jude family. “That to me speaks volumes,” she says.

She tells the story of two teenagers, 15 and 16 years old, who were diagnosed with a rare form of brain cancer. Even at that age they decided they wanted to donate their brains to research. “I may be slow,” Meade says, “but I can run, and I’ll keep going. There are kids who know that they’re dying and are willing to donate their brains looking for a cure.”

Why run for a cause?

“I think everyone should run for a cause at least once,” Meade concludes. “I think you should do a distance that you haven’t done, just to feel that achievement and the emotions that come with it—we should always do a little outside our comfort zone. If you can do all that for a charity, there is no greater feeling.”

“The Rock ‘n’ Roll Running Series offers some amazing events,” Meade says. “Las Vegas for example—just the thought of the Strip only being closed on New Year’s and for the race. All the lights, all the excitement, a band every mile. I tell people why not pick a great first one? Get a taste of it in the best way.”